Edit
watch 01:36
We're Getting Mutants in the MCU - The Loop
Do you like this video?
Play Sound
Jeff Bridges 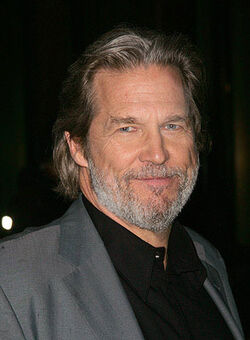 Jeff Bridges (born December 4, 1949) is an Academy Award-winning American actor who plays the part of Marshall Reuben J. Cogburn, a role which was originally filled by John Wayne.

The son of well-known film and TV star Lloyd Bridges and his long-time wife Dorothy Dean Bridges, Jeffrey Leon Bridges was born on December 4, 1949 in Los Angeles, California, and grew up amid the happening Hollywood scene with big brother Beau Bridges. Both boys popped up unbilled alongside their mother in the film The Company She Keeps (1951), and appeared on occasion with their famous dad on his popular underwater TV series "Sea Hunt" (1958) while growing up. At age 14, Jeff toured with his father in a stage production of "Anniversary Waltz". The "troublesome teen" years proved just that for Jeff and his parents were compelled at one point to intervene when problems with drugs and marijuana got out of hand.

He recovered and began shaping his nascent young adult career appearing on TV as a younger version of his father in the acclaimed TV-movie Silent Night, Lonely Night (1969) (TV), and in the strange Burgess Meredith film The Yin and the Yang of Mr. Go (1970). Following fine notices for his portrayal of a white student caught up in the racially-themed Halls of Anger (1970), his career-maker arrived just a year later when he earned a coming-of-age role in the critically-acclaimed ensemble film The Last Picture Show (1971). The Peter Bogdanovich- helmed film made stars out off its young leads (Bridges, Timothy Bottoms, Cybill Shepherd) and Oscar winners out of its older cast (Ben Johnson, Cloris Leachman). The part of Duane Jackson, for which Jeff received his first Oscar-nomination (for "best supporting actor"), set the tone for the types of roles Jeff would acquaint himself with his fans -- rambling, reckless, rascally and usually unpredictable).

Owning a casual carefree handsomeness and armed with a perpetual grin and sly charm, he started immediately on an intriguing 70s sojourn into offbeat filming. Chief among them were his boxer on his way up opposite a declining Stacy Keach in Fat City (1972); his Civil War-era conman in the western Bad Company (1972); his redneck stock car racer in The Last American Hero (1973); his young student anarchist opposite a stellar veteran cast in Eugene O'Neill's The Iceman Cometh (1973); his bank-robbing (also Oscar-nominated) sidekick to Clint Eastwood in Thunderbolt and Lightfoot (1974); his aimless cattle rustler in Rancho Deluxe (1975); his low-level western writer who wants to be a real-life cowboy in Hearts of the West (1975); and his brother of an assassinated President who pursues leads to the crime in Winter Kills (1979). All are simply marvelous characters that should have propelled him to the very top rungs of stardom...but strangely didn't.

Perhaps it was his trademark ease and naturalistic approach that made him somewhat under appreciated at that time when Hollywood was run by a Dustin Hoffman, Robert De Niro and Al Pacino-like intensity. Neverthless, Jeff continued to be a scene-stealing favorite into the next decade, notably as the video game programmer in the 1982 sci-fi cult classic TRON (1982), and the struggling musician brother vying with brother Beau Bridges over the attentions of sexy singer Michelle Pfeiffer in The Fabulous Baker Boys (1989). Jeff became a third-time Oscar nominee with his highly intriguing (and strangely sexy) portrayal of a blank-faced alien in Starman (1984), and earned even higher regard as the ever-optimistic inventor Preston Tucker in Tucker: The Man and His Dream (1988).

Since then Jeff has continued to pour on the Bridges magic on film. Few enjoy such an enduring popularity while maintaining equal respect with the critics. The Fisher King (1991), American Heart (1992), Fearless (1993), The Big Lebowski (1998) (now a cult phenom) and The Contender (2000) (which gave him a fourth Oscar nomination) are prime examples. More recently he seized the moment as a bald-pated villain as Robert Downey Jr.'s nemesis in Iron Man (2008) and then, at age 60, he capped his rewarding career by winning the elusive Oscar, plus the Golden Globe and Screen Actor Guild awards (among many others), for his down-and-out country singer Bad Blake in Crazy Heart (2009).

Jeff has been married since 1977 to non-professional Susan Geston (they met on the set of Rancho Deluxe (1975)). The couple have three daughters, Isabelle (born 1981), Jessica (born 1983), and Hayley (born 1985). He hobbies as a photographer on and off his film sets, and has been known to play around as a cartoonist and pop musician.

Actor spouses Larry Parks and Betty Garrett were his godparents.

Is a talented guitarist.

Between takes, he shoots still photographs as a hobby.

Has played roles with the first name 'Jack' seven times, and with the surname 'Jackson' four times.

Is a big fan of Brian Wilson and The Beach Boys.

His performance as Jeffrey "The Dude" Lebowski in The Big Lebowski (1998) is ranked #90 on Premiere Magazine's 100 Greatest Performances of All Time (2006).

He is well known for his liberal political views.

His performance as Jeffrey "The Dude" Lebowski in The Big Lebowski (1998) is ranked #90 on Premiere Magazine's 100 Greatest Movie Characters of AllTime.

Was considered for the part of Travis Bickle in Taxi Driver (1976).

Is mentioned in the song "Jeff Bridges" by Midnight Choir.

He was considered, along with Nick Nolte, for the role of Det. Sonny Crockett on "Miami Vice" (1984). Both were deemed too expensive, and Don Johnson got the part.

Was considered for the role of Dan Gallagher in Fatal Attraction (1987).

It was during the filming of The Iceman Cometh (1973) that he decided to focus solely on acting, and make it his profession. Up until then, he has said that he "just enjoyed the ride".

Considered for Christopher Walken's role in The Deer Hunter (1978).

Auditioned for the part of 'Cpt. Willard' in Apocalypse Now (1979), as did his good friend Nick Nolte.

His good friend Terry Gilliam wanted him for the part of James Cole in Twelve Monkeys (1995). Bruce Willis got the part because he was a more bankable star.

He was one of many considered for the role of 'John Rambo' in First Blood (1982) when the script was still circulating.

He was strongly considered for the lead role of 'Quaid' in Total Recall (1990).

He was offered the male lead in Love Story (1970). His brother Beau Bridges was the director's first choice. Both turned it down.

Offered the part of Bobby Grady in Crimes of Passion (1984).

He is a big fan of actors Robert Ryan and Lee Marvin. Favorite movie is Billy Budd (1962).

Fan and friend of Kris Kristofferson. They both appeared in Heaven's Gate (1980), and Kristofferson famously sang "Help Me Make it Through the Night" in Fat City (1972), which starred Bridges.

Bridges and Nick Nolte were considered as possible candidates for the two leads in Heat (1995), roles that famously went to Al Pacino and Robert De Niro.

Director Michael Mann strongly considered Bridges for the lead in Thief (1981), but among other things, he was believed to be too young to be able to pull of the role of a seasoned criminal.

Did some of his education at a military academy.

Was director Taylor Hackford's original choice for the lead role in An Officer and a Gentleman (1982), but he had to turn it down due to a busy schedule.

Turned down the lead role of 'Jack Cates' in 48 Hrs. (1982), because he didn't want to do a simple cop movie. The role went to Nick Nolte. Bridges later worked with the director Walter Hill in Wild Bill (1995).

Enjoys cigars, and smokes a couple every day.

Is described as being an extremely laid-back guy.

Turned down the lead role of Indiana Jones, one of the most famous movie characters of all time, in Raiders of the Lost Ark (1981). He does not regret it.

Eagerly pursued the lead in The Stunt Man (1980). Bridges was reportedly very keen to play Cameron, a fugitive who hides out at a movie set and accidentally becomes a stunt man.

Jacknife (1989) was developed as a vehicle for Bridges. He turned it down, and Robert De Niro took on the lead role.

He was considered for the part of Batman/Bruce Wayne in Batman (1989).

Turned down the role of "Snake Plissken" in Escape from New York (1981). The role went to Kurt Russell. Strangely Bridges was also considered for the lead in The Thing (1982) A role also played by Kurt Russell.

Was set to star in Tequila Sunrise (1988) with Nick Nolte, but when Nolte dropped out, so did he. Mel Gibson and Kurt Russell starred in the film.

Was considered for the part of "McKenna" in The Mechanic (1972) when Cliff Robertson was set to star in the film.

The first actor to be nominated for an Academy Award for his performance in a film that also starred Clint Eastwood. Bridges was nominated for Thunderbolt and Lightfoot (1974).

When a Freshman at Brentwood Academy in 1964, he was on the High School Football "A" Team.

Is only the third actor in Oscar history to be nominated for an award for playing a part that had already won a previous actor an award. John Wayne won Best Actor for playing Rooster Cogburn in True Grit (1969), the same role that earned Bridges a nomination. Previously, Marlon Brando and Robert De Niro both won Oscars for playing Vito Corleone in The Godfather (1972) and The Godfather: Part II (1974). Gérard Depardieu was nominated for playing the title role in Cyrano de Bergerac (1990), the same role that had won an Oscar for José Ferrer forty years earlier. Bridges and Depardieu are the only actors who were nominated for a direct remake of an earlier Oscar-winning film﻿ 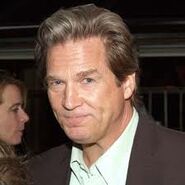 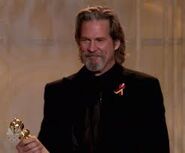 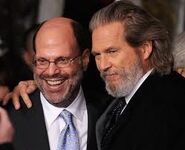