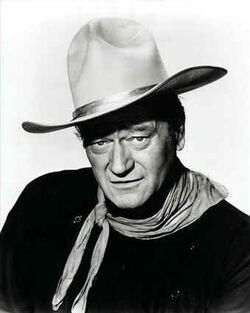 Marion Mitchell "Duke" Morrison - born Marion Robert Morrison - and better known by his stage name John "The Duke" Wayne played Reuben J. "Rooster" Cogburn in True Grit 1969 and Rooster Cogburn. He was an Academy Award-winning American film actor, director and producer. He became an enduring American icon, epitomizing rugged masculinity and the American spirit. He is famous for his distinctive voice and walk. In 1999, the American Film Institute named Wayne 13th among the Greatest Male Stars of All Time.

John Wayne was born Marion Robert Morrison in Winterset, Iowa. He was of Presbyterian Scots-Irish descent. His family moved to Palmdale, California, and then to Glendale, California in 1911, where his father worked as a pharmacist. Wayne received his famous nickname, "Duke," from a local fireman because he never went anywhere without his huge Airedale Terrier dog, Duke. He preferred "Duke" to "Marion," and the name stuck for the rest of his life.

As a teenager, Wayne got a job at a local ice cream shop and attended Wilson Middle School in Glendale. He played football for the 1924 champion Glendale High School team. He applied to the U.S. Naval Academy, but was not accepted. He instead attended the University of Southern California (USC), majoring in pre-law. Wayne also played on the USC football team under legendary coach Howard Jones. An injury curtailed his athletic career and he lost his athletic scholarship.

Out of money, he dropped out of USC and began working at the local film studios. Prolific silent western film star Tom Mix got him a job in the prop department in exchange for football tickets. Wayne's career in Hollywood had begun. He was soon moved to bit parts where he developed a longtime friendship with director John Ford.

Wayne started his career at Fox Film Corporation performing bit roles. He got his big break in 1930 when director Raoul Walsh cast him in his first starring role in The Big Trail. For the role he was given a new screen name, John Wayne, and a raise to $105 a week. Unfortunately the big budget picture was considered a flop. Wayne was relegated to small roles in large pictures after The Big Trail debacle. He appeared in many low-budget "Poverty Row" westerns, mostly at Monogram Pictures and serials for Mascot Pictures Corporation. By his own estimate, Wayne appeared in about eighty of these horse operas between 1930-1939. During his time on set he was mentored by stuntmen on how to ride and other western skills. He and famed stuntman Yakima Canutt developed and perfected stunts still used today.

Wayne's real break out role was in director John Ford's classic Stagecoach in 1939. The film was a huge critical and financial success, and Wayne became a star. He later re-teamed with Ford more than twenty times including The Searchers in 1956.

He passed on the starring role in All the King's Men because he felt it was to un-American. Broderick Crawford eventually got the role and ironically beat Wayne, who had been nominated for Sands of Iwo Jima, out of an Academy Award.

One of Wayne's most popular roles of the time was in The High and the Mighty. His portrayal of a heroic copilot won widespread acclaim. He later went on to portray aviators in Flying Tiger, Flying Leathernecks, Island in the Sky, The Wings of Eagles, and Jet Pilot.

Wayne's finest performance came when he re-teamed with John Ford in The Searchers (1956). Based on the 1954 novel by Alan Le May, The Searchers is the story of an obsessive Civil War veteran, Ethan Edwards, who spends years searching for his kidnapped niece. When he finally finds the young woman captured by Indians, he is disgusted to find that she has become one of them. While the film was a commercial success it was not nominated for any Academy Awards. Many have said that because of his Oscar snub for The Searchers he was later awarded the Best Actor for True Grit, which is considered an inferior role.

His final film, The Shootist (1976), featured a main character who was dying of cancer, much like the aging star. He died 3 years later. 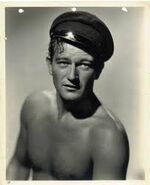 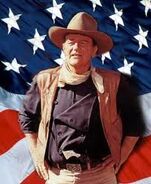