Edit
watch 01:36
We're Getting Mutants in the MCU - The Loop
Do you like this video?
Play Sound
Josh Brolin 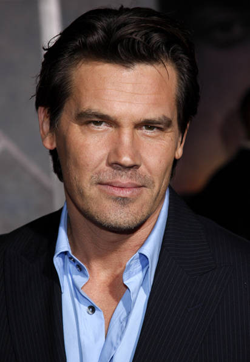 Rugged features and a natural charm have worked for Josh Brolin, the son of actor James Brolin. He has recently seen a massive surge in his career, finding well-known roles such as a policeman, a hunter, and the President of the United States.

Born February 12, 1968, Brolin was initially against the lifestyle of the entertainment business, in light of his parents' divorce, and both of them being actors. However, he fell for theatre after playing a part in a school production of "A Streetcar named Desire". His first major screen role was as the older brother in the film The Goonies (1985), based on a story by Steven Spielberg. He then immediately moved on to work on television, taking roles in such series as Private Eye (1987) (TV) and "The Young Riders" (1989). "Private Eye" was a chance for Brolin to play a detective. "The Young Riders" was set just before the Civil War, and was co-directed by Brolin's father, James Brolin.

After "The Young Riders" (1989), Brolin moved back to the big screen, with mediocre success. He played a supporting role in The Road Killers (1994), but the film was not a hit. He followed up with the crime film Gang in Blue (1996) (TV), the romantic film Bed of Roses (1996), the thriller film Nightwatch (1997), and appeared with his father in My Brother's War (2002). However, nothing truly stuck out, especially not the box office flop The Mod Squad (1999). The 2000s initially brought no significant change in Brolin's career. He appeared in the independent film Slow Burn (2000), the sci-if thriller Hollow Man (2000) and starred in the television series "Mister Sterling" (2003). In 2004, he married actress Diane Lane and, as of now, are still together.

It was not until 2007 that Brolin received much acclaim for his films. He took a supporting role in the Quentin Tarantino-written Grindhouse (2007) which was a two-part film accounting two horror stories. He also played two policemen that year: a corrupt officer "Trupo" in the crime epic American Gangster (2007), and an honest police chief in the emotional drama In the Valley of Elah (2007) which starred Tommy Lee Jones and was directed by Paul Haggis. However, it was his involvement in No Country for Old Men (2007) that truly pushed him into the limelight.

The film, directed by the Coen brothers, was about a man (Brolin) who finds a satchel containing two million dollars in cash. He is pursued by an unstoppable assassin (Javier Bardem, who won an Oscar for his work) and his friend, a local sheriff (Tommy Lee Jones). The film won four Oscars, including Best Picture and Best Director.

Brolin found high-profile work the next year, being cast as "Supervisor Dan White" in the film Milk (2008/I). His performance as the weak and bitter politician earned him an Oscar nomination, and Brolin received more praise for his fascinating portrayal of George W. Bush in the Oliver Stone film W. (2008/I). Despite the mediocre success of W. (2008/I), he was recognized as the best part of the film, and Milk (2008/I) was another triumph, critically and commercially.

Brolin then acted in the smaller comedy Women in Trouble (2009) before landing a number of large roles in 2010. The first of these was the film based on the comic book figure Jonah Hex (2010). The film was a box office flop and critically panned, but Brolin also forged a second collaboration with legendary director Oliver Stone for Wall Street: Money Never Sleeps (2010). Brolin played a large role alongside such young stars as Carey Mulligan and Shia LaBeouf, and older thespians such as Michael Douglas, Eli Wallach, and Frank Langella. Brolin's character was "Bretton James", a top banker in the film, and also the film's chief antagonist. Brolin also appeared in Woody Allen's London-based film You Will Meet a Tall Dark Stranger (2010) and a second collaboration with the Coen Brothers, which was a remake of True Grit (1969). In the works for 2011 is a sequel for Brolin, the third "Men in Black" film, which will have the original stars coming back.

Despite his earlier mediocre success and fame, Brolin has maintained a choosiness in his films and, recently, these choices have paid off profoundly. Hopefully, he continues this streak of good fortune that his talents have finally given him.

Has lived on a ranch in California with his significant other and their two children. He spent five years performing in and directing plays at the Reflections Festival at the GeVa Theater in Rochester, N.Y. Brolin said, "If I'm any kind of actor now it's because of Rochester." [1996].

He won the 24th Annual Toyota Pro/Celebrity Race in Long Beach, California in April 2000 22 years after his dad won the tournament. It took him just over 18 minutes to complete the course. He outshone 17 other celebrity and professional drivers including George Lucas, John Elway, and actresses Ashley Judd, Melissa Joan Hart, and Alyson Hannigan.

Collects the art of Malcolm Liepke and Ernst Neizvestny.

Has son, Trevor Brolin, sketches all his characters before filming.

Has written various stories and poems based on his mother Jane Agee (who died in 1995).

Was named after the character "Josh Randall" played by Steve McQueen in the series "Wanted: Dead or Alive" (1958).

He was co-executive director of Geva Theatre's "Reflections" (3 American plays in rotating repertory) from 1991 to 1995 with Anthony Zerbe.

A huge John Cassavetes fan, stating that he has watched A Woman Under the Influence (1974) more than 40 times.

Once aspired to be a chef.

When he's not working on films he enjoys racing cars and surfing.

In May 2006, two days after being cast in the film, No Country for Old Men (2007), he crashed his motorcycle into a vehicle on Highland Avenue in Los Angeles. Luckily he only shattered his collarbone and two weeks later he showed up to start filming.

Loves playing the stock market and is an avid day trader. He's so serious about playing Wall Street, he's got the trade station with three computer screens going simultaneously in his house in Los Angeles. He also co-created marketprobability.com, a website giving investors historical stock overviews.

He was offered the part of Marcus Wright in Terminator Salvation (2009), but turned the offer down.

Brolin was concerned what reception he would have on location in San Francisco for the production of Milk (2008/I) playing Dan White, the murderer of the city's famous gay politician, Harvey Milk. However, Brolin found he was warmly welcomed by the gay community for his participation in a film about their political hero.

He was the Fox network's choice to play Officer Tom Hanson in "21 Jump Street" (1987), but producer Patrick Hasburgh preferred Johnny Depp instead.

Josh and Javier Bardem's kiss at the 2011 Oscar's.