Edit
watch 01:36
We're Getting Mutants in the MCU - The Loop
Do you like this video?
Play Sound
Matt Damon 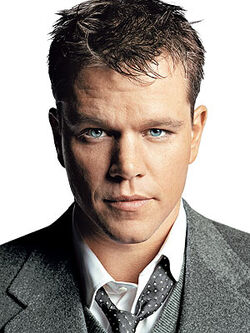 Matthew Paige "Matt" Damon (born October 8, 1970) is an Academy Award-winning American actor, screenwriter, and philanthropist who plays the part of the Texas Ranger La Boeuf, which was portrayed by Glen Campbell in the original 1969 film.

Matthew Paige Damon, or better known to fans as Matt Damon was born in Boston Massachusetts, USA to Kent Damon, a stockbroker, Realtor and tax preparer, and Nancy Carlsson-Paige, an early childhood education professor at Lesley University. Matt has an older brother named Kyle who is now a sculptor. Unfortunately for Matt and his brother, their parents divorced in the year 1973.

The 5'10" star is of English, Finnish and Scottish ancestry. While his parents were still together, their family lived in Newton, before eventually settling for a divorce, where Damon and his brother moved with his mother to Cambridge. He grew up in a stable community back in Massachusetts. Matt also grew up near actor Ben Affleck, when he was younger.

Matt attended Cambridge Ridge and Latin School which is located in Cambridge and he performed in a number of theater productions during his time there. Later on, he was accepted into Harvard University as an English major in the fall of 1988 and was supposed to graduate with the class of 1992. While in Harvard, he kept on skipping classes to pursue acting projects, which included the TNT original film, Rising Sun (1993), and prep-school drama, School Ties (1992). It was until his film, Geronimo: An American Legend (1993), was expected to be a big success that he decided to drop out of university completely.

Arriving in Hollywood, Matt managed to get his first break with a part in the romantic comedy, Mystic Pizza (1988). However, the film did not do too well and his film career failed to take off. Not letting failure discourage him from acting, he went for another audition, and managed to get a starring role in School Ties (1992).

Up next for Matt was a role as a soldier who had problems with drug-addiction in the movie, Courage Under Fire (1996). Matt had, in fact, lost forty pounds for his role which resulted in health problems. The following year, his garnered accolades for Good Will Hunting (1997), a screenplay he had originally written for an English class at Harvard University. Good Will Hunting (1997) was nominated for 9 Academy Awards, one of which, Matt won for Best Original Screenplay along with Ben Affleck.

In the year 1998, Matt played the title role in Steven Spielberg's film, Saving Private Ryan (1998), which was one of the most acclaimed films in that year. Matt had the opportunity of working with Tom Hanks and Vin Diesel while filming that movie. That same year, he starred as an earnest law student and reformed poker player in Rounders (1998), starring opposite Edward Norton and John Malkovich.

The next year, Matt rejoined his childhood friend, Ben Affleck and fellow comedian, Chris Rock, in the comedy Dogma (1999). Towards the end of 1999, Matt played "Tom Ripley", a working-class young man who tastes the good life and will do anything to live it. Both Jude Law and Gwyneth Paltrow also starred in the movie. The Talented Mr. Ripley (1999) earned mixed reviews from critics, but even so, Matt earned praise for his performance.

Matt lent his voice to the animated movie, Titan A.E. (2000) in the year 2000, which also earned mixed reviews from the public. He also starred in two other movies, All the Pretty Horses (2000) and the golf comedy-drama, The Legend of Bagger Vance (2000), starring alongside Will Smith.

One of Matt's most recognizable work to date is his role in the "Bourne" movie franchise. He plays an amnesiac assassin, "Jason Bourne", in The Bourne Identity (2002), The Bourne Supremacy (2004) and The Bourne Ultimatum (2007).

Another praised role is that as "Linus Caldwell" in the "Ocean's" movie franchise. He had the opportunity to star opposite George Clooney, Brad Pitt, Julia Roberts and Don Cheadle in Ocean's Eleven (2001). The successful crime comedy-drama eventually had two other sequels, Ocean's Twelve (2004) and Ocean's Thirteen (2007).

Among other highly acclaimed movies that Matt managed to be a part of was in Terry Gilliam's The Brothers Grimm (2005), George Clooney's Syriana (2005), Martin Scorsese's The Departed (2006) and Robert De Niro's The Good Shepherd (2006).

In his personal life, Matt is now happily married to Argentine-born Luciana Barroso, whom he met in Miami, where she was working as a bartender. They married in a private civil ceremony on December 9, 2005, at the Manhattan Marriage Bureau. The couple have four daughters Alexia, Luciana's daughter from a previous relationship, as well as Isabella, Gia and Stella.

Matt is a big fan of the Boston Red Sox and he tries to attend their games whenever possible. He has also formed great friendships with his Ocean's co-stars, George Clooney and Brad Pitt, whom he works on charity projects with. He and actor Ben Affleck, together with Ben's wife, Jennifer Garner, are also good family friends and can be often seen going out together with Matt's wife, Luciana Barroso.

1998: Played in $10,000 buy-in Texas Hold 'Em tournament at the World Series of Poker (www.wsop.com) in Las Vegas. He was knocked out in the first day by poker legend Doyle Brunson. Damon had kings, Brunson aces.

Chosen as one of "the 50 Most beautiful people in the world" by People magazine (1998).

His parents divorced when he was two and he spent part of his childhood in a commune in Boston with his mother.

Dropped out of Harvard 12 credits short of graduating to pursue his acting career.

To perfect his Southern accent for his role as Rudy Baylor in The Rainmaker (1997), he tended bar in Knoxville, TN, for free. Later he hired one of the customers to serve as his dialect coach.

Auditioned for a role in To Die For (1995) which was eventually given to Joaquin Phoenix.

Audtioned for a part in Primal Fear (1996) that was eventually played by Edward Norton. He and Norton starred together two years later in Rounders (1998).

Both he and Ben Affleck worked as extras on the film Field of Dreams (1989). At one point during the shoot, Matt took some blades of grass from the field as mementos for his father.

Turned down the lead role in The Quick and the Dead (1995). Leonardo DiCaprio ended up with the role.

When his baby nephew cries, he sings "Afternoon Delight" for him.

Shaved his head for the movie The Brothers Grimm (2005) (to assist in the wearing of a wig for that role). The shaved head was shown in the movie EuroTrip (2004), which was filmed in Prague at the same time.

Started a bowling league in Berlin while making The Bourne Supremacy (2004).

Had a cameo as a waiter in the film The Sum of All Fears (2002), but it was cut from the final film.

Is the real-life best friend of Ben Affleck. Each has starred together or had cameos in each of the other's films.

While promoting The Bourne Supremacy (2004) on "The Tonight Show with Jay Leno" (1992), he revealed that when he was a college freshman his agent from a "ma and pa agency" inadvertently sent him and Ben Affleck to an audition for "The New Mickey Mouse Club" (1977). They were under the impression that they were going to meet the head of Touchstone Pictures.

His uncle, George Brunstad, swam the English Channel at the age of 70. He completed the 21-mile swim in 15 hours and 59 minutes, making him the new world record holder as the oldest person to complete the swim. In the process, he raised $12,000 for a Haitian children's group (29 August 2004).

Quit smoking after visiting a hypnotist in L.A.

Grew up next door to radical historian Howard Zinn. Damon references Zinn's seminal work "A People's History of the United States" as Will in Good Will Hunting (1997).

Learned to play piano for the film The Talented Mr. Ripley (1999).

Was considered for the role of Matt Murdock/Daredevil in Daredevil (2003). The role eventually went to his best friend Ben Affleck.

One of his first movie roles was a one-line part in Mystic Pizza (1988) starring Julia Roberts. Later, he starred with Roberts in Ocean's Eleven (2001).

After a notable weight gain for Stuck on You (2003), he lost 22 pounds training for The Bourne Supremacy (2004), eventually having six-pack abs.

Born on the same day as Sigourney Weaver, Kristanna Loken and Nick Cannon.

His wife, Luciana Barroso, was born in Argentina.

Met his wife, Luciana Barroso, in Florida, while he was filming Stuck on You (2003) and she was working as a bartender.

Was once offered the chance at playing Daredevil when it was in production at Miramax in 1999. This version would have starred Damon and been written by Kevin Smith and directed by Robert Rodriguez. However, Marvel Comics wanted too large a budget for the filmmakers' tastes.

He is of Scottish, Finnish and English descent.

Turned down the part of Bobby Mercer in Four Brothers (2005), as he found the script to be "ultra-violent". The part eventually went to Mark Wahlberg.

Francis Ford Coppola cast him in The Rainmaker (1997) after seeing him in Courage Under Fire (1996).

Turned down the role of Harvey Dent in The Dark Knight (2008).

Both he and best friend Ben Affleck spent Father's Day 2007 with their wives and children together on vacation in Hawaii.

Is only 11 years older than Eddie Redmayne who plays his son in The Good Shepherd (2006).

He gained over 30 pounds to play Mark Whiteacre in The Informant! (2009), which he dieted off as soon as the shoot was complete.

He and Ben Affleck lived two blocks away from each other in Cambridge when they were children.

Has an older brother named Kyle, who is a sculptor.

Originally cast as Dan White in Milk (2008/I), but had to back out due to scheduling conflicts with Green Zone (2010).

Was at some point in talks to star in a remake of Blue Thunder (1983) with John Milius directing.

Was in a relationship with Penélope Cruz (June-December 2000). 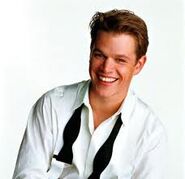